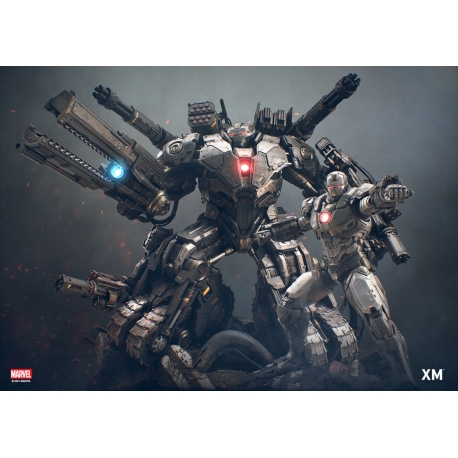 By buying this product you can collect up to 16980 loyalty points. Your cart will total 16980 points that can be converted into a voucher of RM169.80.

XM Studios is excited to present our next 1:4 MARVEL Premium Collectibles series statue, War Machine (XM 'War Tank' Exclusive), a special collaboration with artist Adi Granov!
War Tank (exclusive to XM Studios) is an original concept jointly co-created by XM and artist Adi Granov (one of his most notable works includes creating the concept and keyframe artwork for the Marvel Studios’ Iron Man, released in 2008).
Never before seen in comics, War Tank is a heavily enhanced exo-suit extension of War Machine’s suit, bringing on explosive artillery, massively expanding War Machine’s firepower and weaponry capabilities.
The angular and aggressive design of War Tank is extensively detailed, drawing referencing from Rhodey’s military background. Hefty armour-plated suit, tank tracks as legs for mobility, a massive rail gun on his right, missile launchers, and multiple gunpower powers up War Tank to be an extremely offensive and powerful asset to have on the battle scene.
Version B allows collectors the option to display War Machine outside of War Tank with 2 additional weaponry, while Version A presents War Machine within War Tank itself.
To date, at a massive dimension of estimate 87cm tall, 90cm in length and 93cm deep, War Tank is the largest 1:4 Scale Statue Collectible that XM has produced since inception. In comparison, Hulk Buster is estimated at 87 x 73 x 77cm.

Note: Render shown and pending final approval, final product may differ. Batteries will not be included for products with light up features due to customs.